Apple’s iBeacon – Where Are We Now?

Written for MPortal by Ezzy Sriram.

In mid-2013, Apple’s iBeacon technology took the center stage at the Cupertino companies’ annual developer’s conference, branded as an extension to the much-anticipated indoor location capabilities of iOS7.

But what was the fall out?

Since premiering, thousands of iBeacons have found homes in retail stores, airports, and even America’s Major League Baseball stadiums. 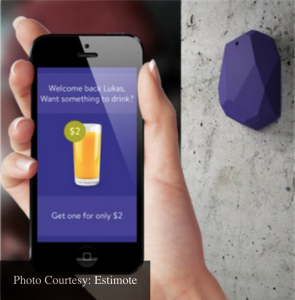 Simply, a device with Bluetooth Low Energy (BLE4.0) that transmits 3 values, one of which is an iBeacon ID. The other 2 values, major and minor value, are also configurable by the developer. iOS’ Core Location Framework enables developers to monitor a particular region surrounding an iBeacon and respond to iPhone’s entering within this region. Once an iPhone is within the region, your iPhone app can determine the linear distance between itself and the iBeacon, along with a slew of other features. In addition, your iPhone app may monitor iBeacons as a background process and open your app when it enters the iBeacon’s range. Isn’t that great?

iBeacons give your iPhone the ability to determine their location while indoors, even the particular section you are standing in in a store.

What makes iBeacon so cool?

If you think back to the advertising mediums you have come across, whether they are TV commercials, radio shout outs, online advertisements, or other, they all lack one critical component. Tailored experiences. You may experience an advertisement based on your general location, but for the most part, marketers take a broad swing to attract the attention of their target audience.

There’s a reason why, over 90% of Facebook $3.5 Billion revenue is advertising based. Facebook offers targeted advertisements based on their collective information about your interests.

iBeacon’s effectiveness comes from its native support on iPhones. As briefly noted above, iBeacon creates the benefit of allowing your apps to automatically open when your iPhone nears them. Although the market for location-based advertising had been ripe for years prior to iBeacon’s release, no app initiative carried the golden ability of iBeacon to open up your apps without you.

iBeacon has amused baseball fans with even better discounted seats near their location.

iBeacon has delivered drinks to music festival-goers no matter their location.

The best part is, the unique, location-centric experience provided by iBeacon is now growing to encompass Android and Windows phones as well.

What does this mean for you?

iBeacon technology creates an outlet for brick and mortar businesses to offer you a made-to-fit shopping experience that only improves over time. Similar to a suit dresser that knows your style, iBeacon makes personalized experiences in our physical world a possibility.

The magic behind the technology is the opportunity it forms for businesses to grab data from the cloud to incentivize your in-person shopping experience. In coming years, the businesses you rally behind will begin to form an increasingly two-sided relationship with you, all thanks to iBeacon.

Feel free to reach out to me if you want to discuss!